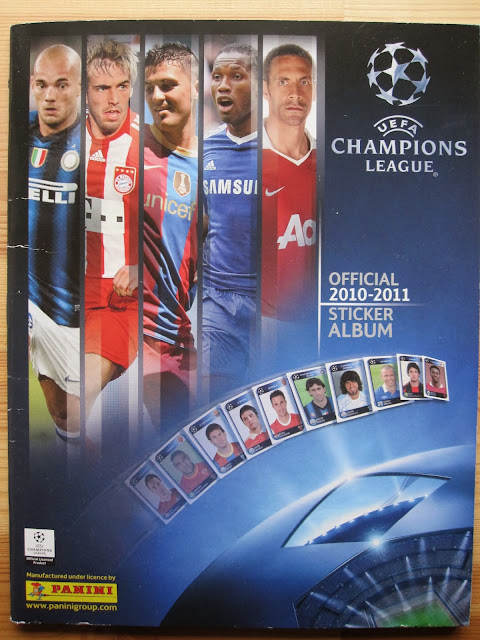 The official album of the Champions League 2010/2011 includes all the 32 participating teams divided by groups. In the introductory pages there are 4 silver shining stickers: Champions League logo, the trophy, the ball and the logo of the final in Wembley.
Barcelona won the trophy defeating Manchester United 3-1 (Pedro, Messi, Villa / Rooney) in the final. In the following we will present the teams in the album divided by groups. Each team has 17 stickers: one shining club badge and 16 players. 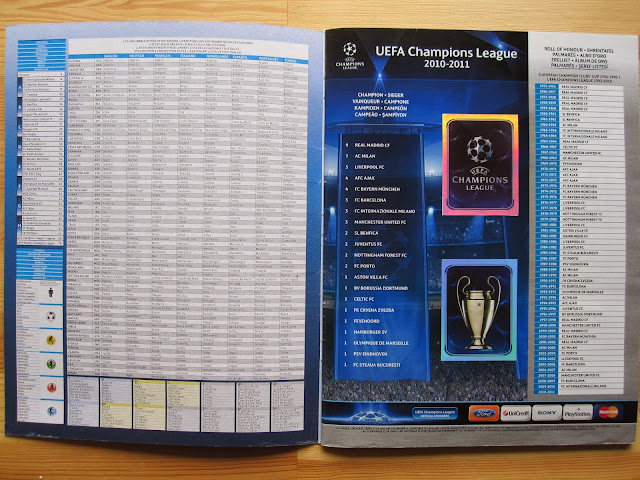 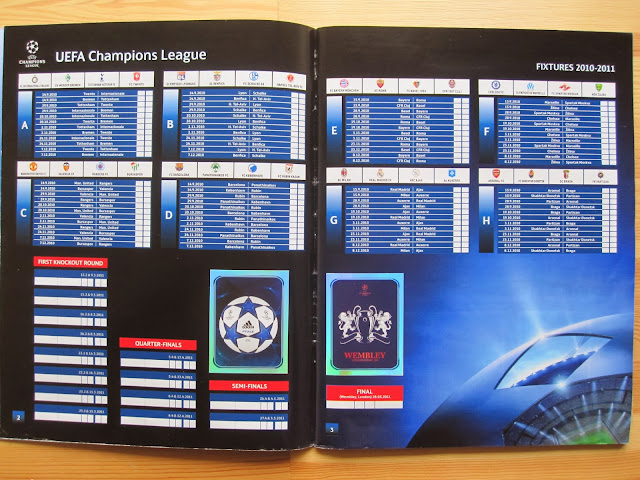 Group A: Internazionale, Werder Bremen, Tottenham, Twente
Inter is the title owner and present a squad very similar to the previous season, without Balotelli (transferred to Manchester City) and with the new young purchase Coutinho. Tottenham won the group with stars like Bale, Modric, Van der Vaart and Crouch; second place for Inter. In the Dutch team Twente, at the first appearance in the Panini Champions League album, we find the young Chadli (now at Tottenham) and Luuk de Jong (Monchengladbach). 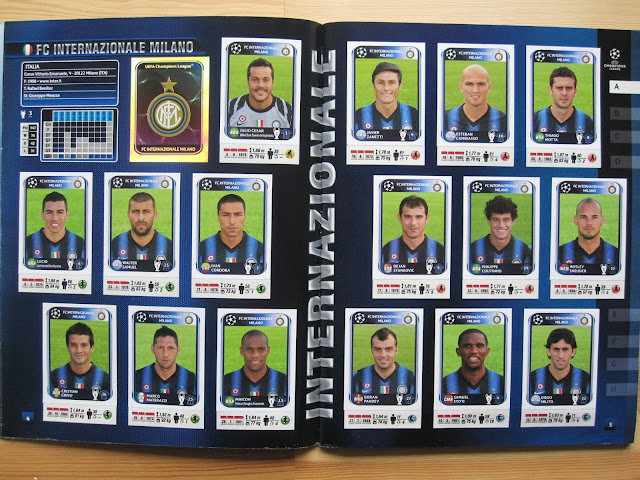 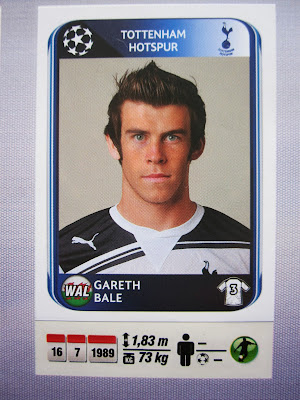 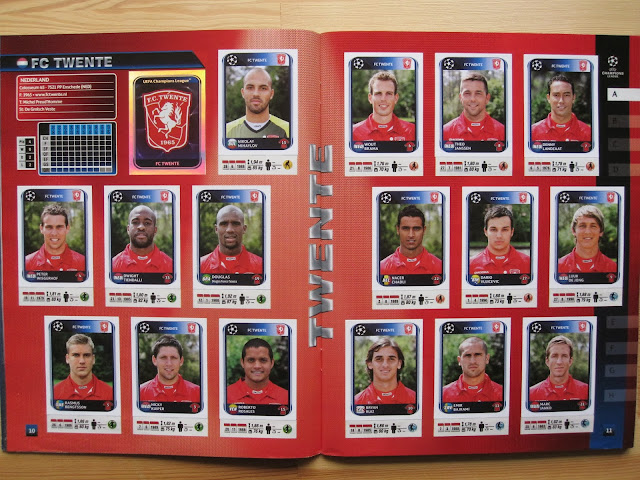 Group B: Lyon, Benfica, Schalke, Hapoel
Lyon got the second place in the group with stars like Lloris (now at Tottenham), Pjanic (now at Roma) and Gourcouff.
In Benfica we find two rookie players that got big transfers at the end of the season: Fabio Coentrao (to Real Madrid) and David Luiz (to Chelsea). Schalke won the group and reached the semifinals thanks to players like Raul, Huntelaar and the goalkeeper Neuer (now at Bayern Munchen). 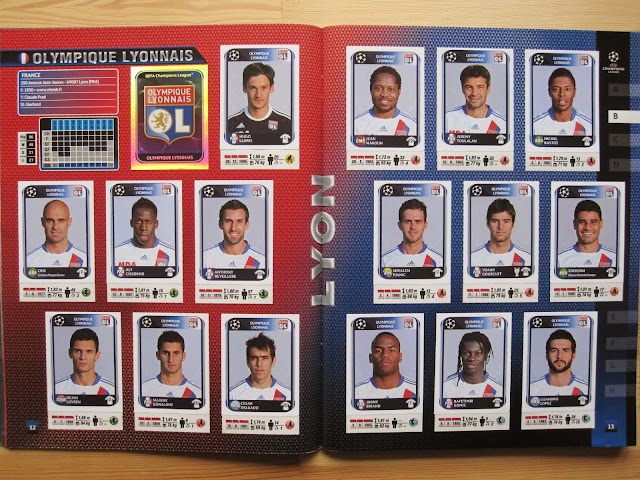 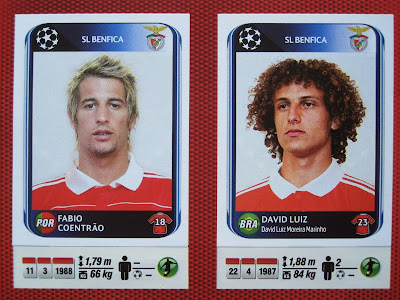 The "rookie" Coentrao and David Luiz at Benfica 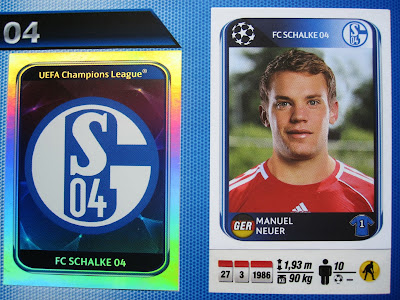 Neuer made a good impression at Schalke 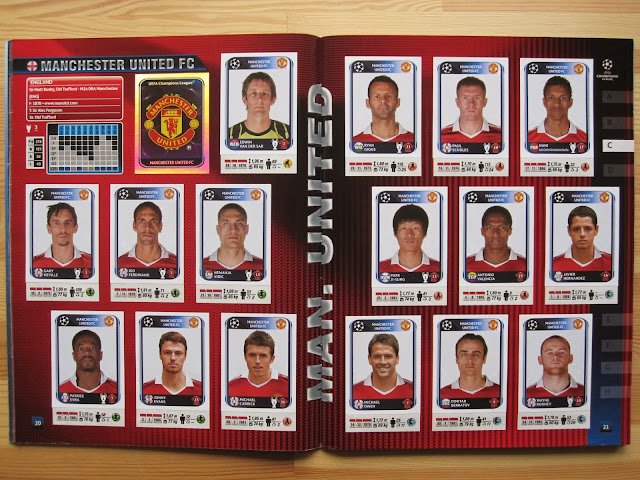 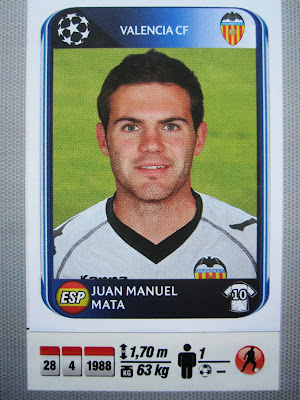 Group D: Barcelona, Panathinaikos, Kobenhavn, Rubin Kazan
Here we find the winners of the competition, with the three scoarers of the final (Pedro, Messi, Villa). In Pananthinaikos we find the stickers of the French duo Sidney Govou - Djibril Cissé. Kobenhavn surprisingly qualified to the next stage with a second place: we can mention Matthias Jorgensen (now at PSV) and Kvist (now at Stuttgart). 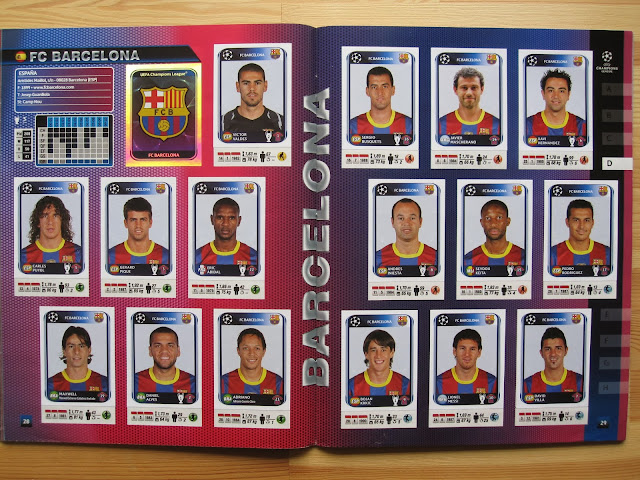 Group E: Bayern Munchen, Roma, Basel, Cluj
Bayern and Roma passed the group but were eliminated in the round of 16 by Inter and Shakhtar, respectively. In Basel we found the stickers of two talented rookie players, Shaqiri and Xhaka, that now are playing for Bayern and B. Moenchengladbach. 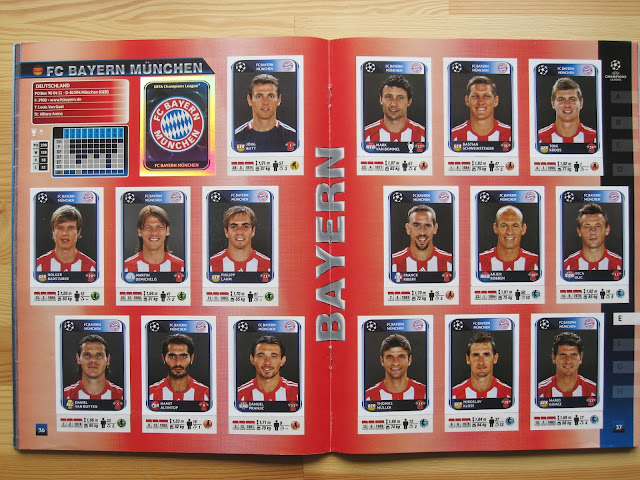 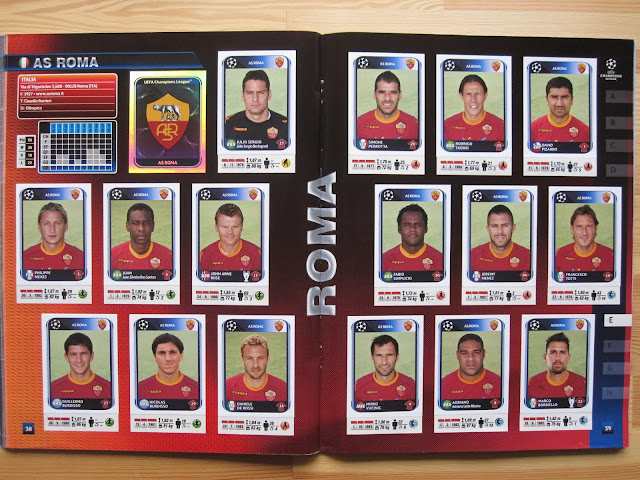 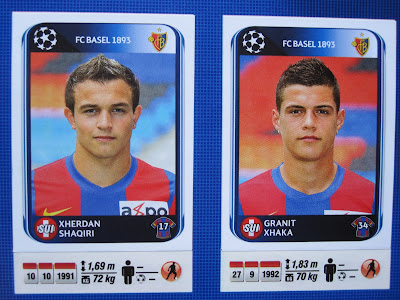 Group F: Chelsea, Olymp. Marseille, Spartak Moskva, Zilina
In this group we find Chelsea, winners of Champions League 2012. Drogba, Lampard, Ramires and Terry are the main assets of the team. In 2011 Chelsea was eliminated in the quarter finals by Manchester United. Also Olympique Marseille was eliminated by Manchester, in the round of 16. First appearance in the Champions League for the Slovakian team MSK Zilina. 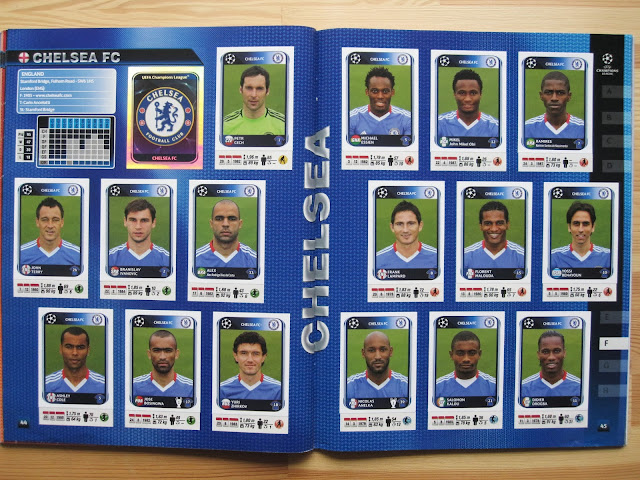 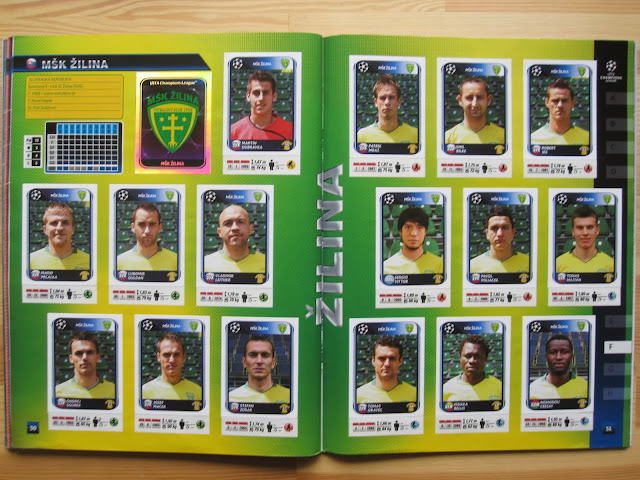 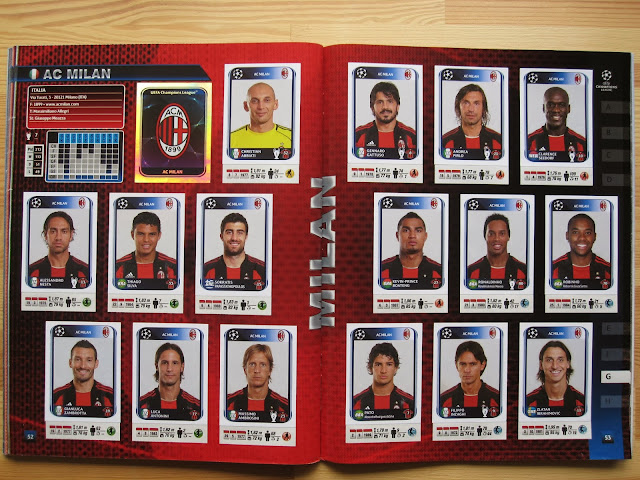 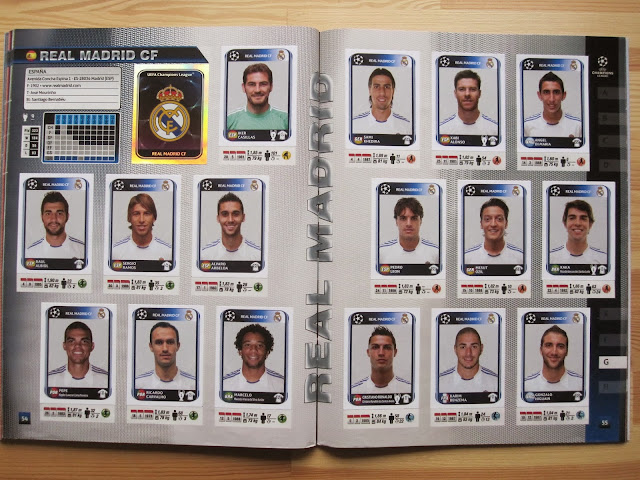 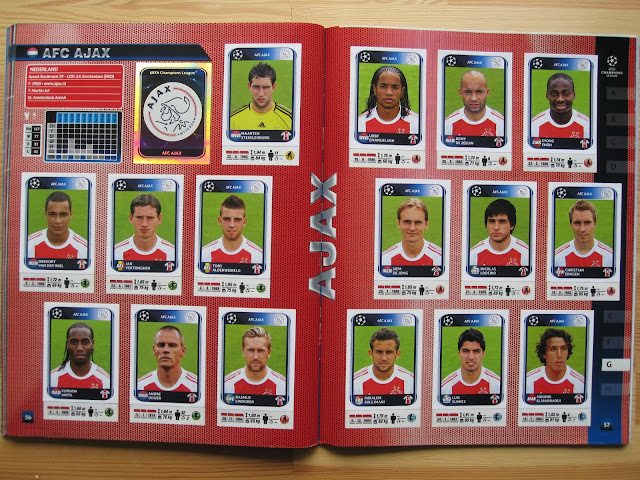 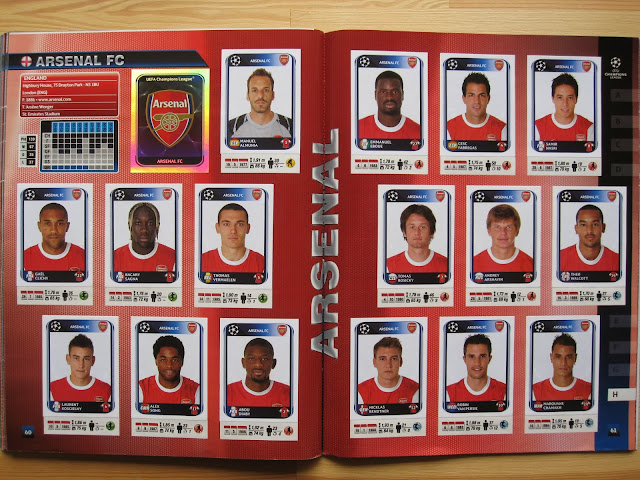 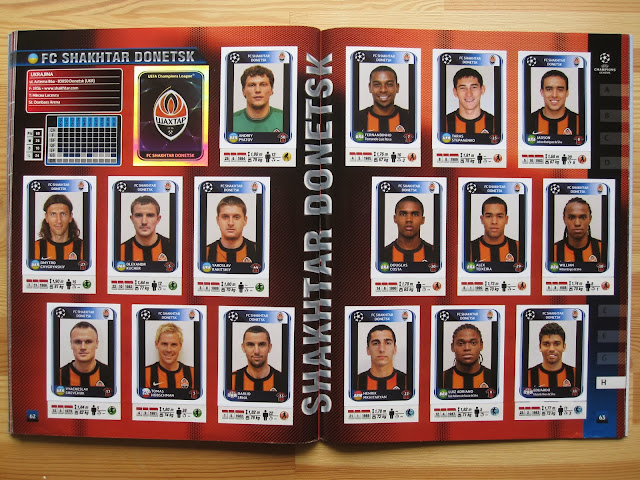 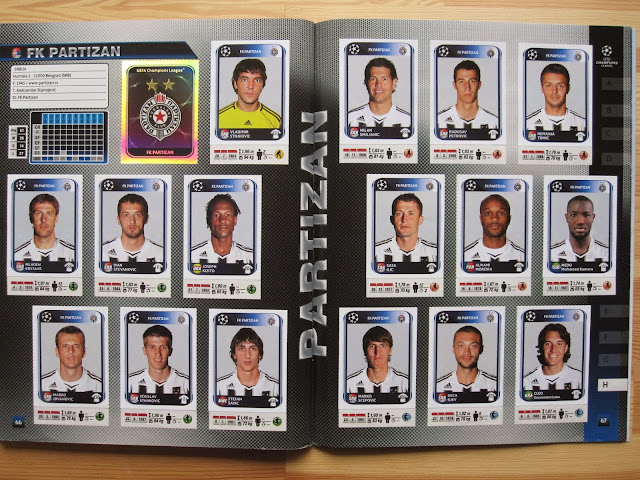 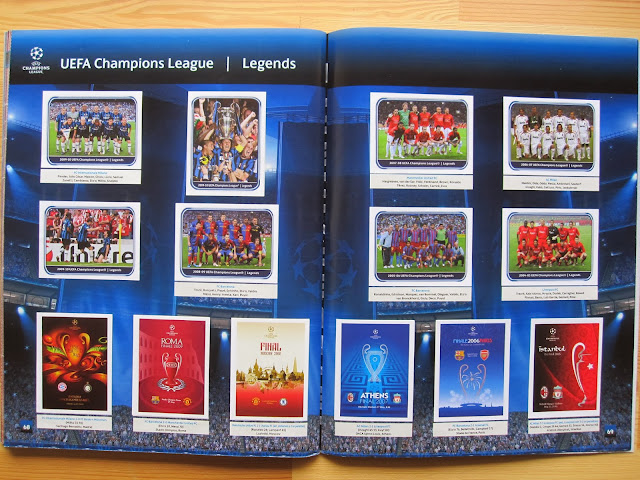 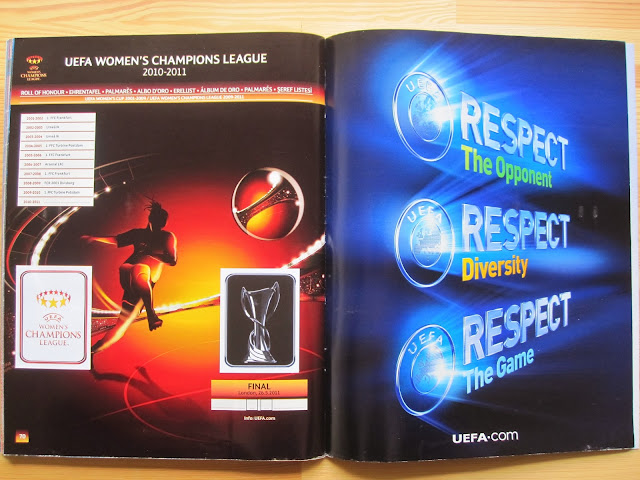