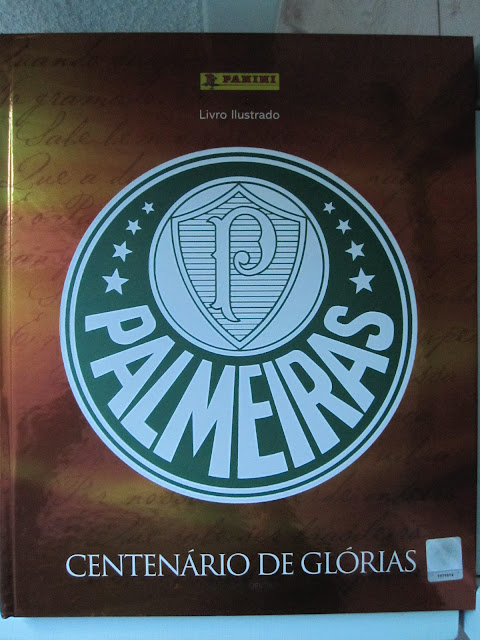 To celebrate 100 years of Palmeiras, Panini released in August 2015 an album going through the history of the club and published also a special hardcover edition of the album. The club Palestra Italia was founded on the 26th August 1914 in Sao Paulo by Italo-Brazilians. It become later on Palmeiras and in the recent years had great talents like Roberto Carlos and Edmundo.
In the following we present the list of sections and stickers of this fabulous collection, which includes also many metallic and fabric stickers (in satin material). 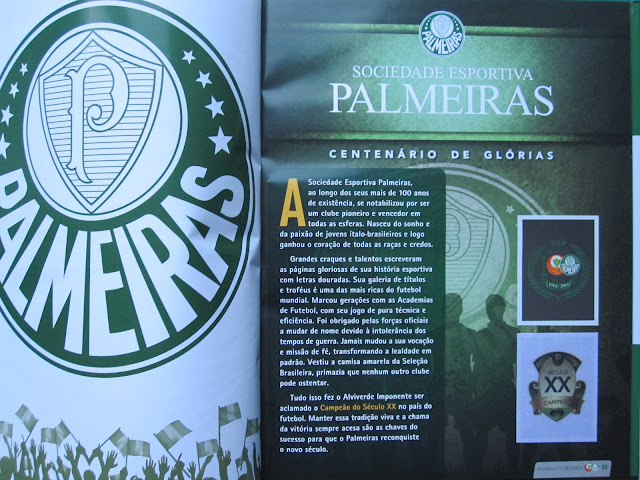 A spectacular page with an overview of the evolution of the Palmeiras badge along the years. Nine stickers in fabric material from the first badge of 1915 to the latest appeared in 1959. 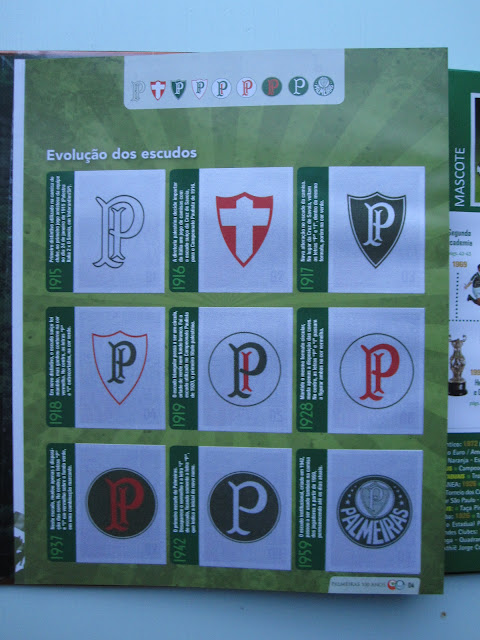 Table of contents - 6 stickers (all fabric)

The album contents are spread on three pages with an extended page. Here appear also six stickers in fabric material: the flag, the mascot, the uniforms (home and away) and the 100 years celebratory stickers (home and away). 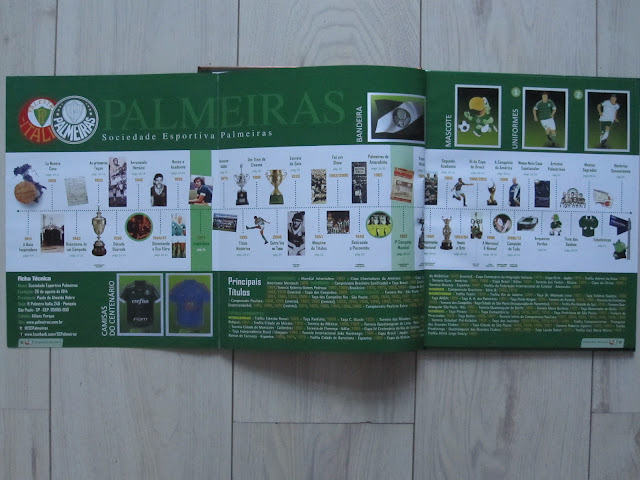 A bota inspiradora: 10 stickers (5 shining)
The origin of the club founded on August 26, 1914. A shining sticker of the first trophy (Taça Savoia) is included. 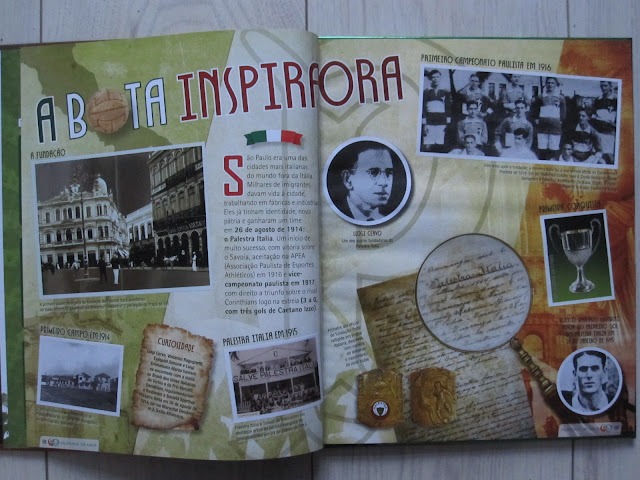 This section is about the "Estadio Palestra Italia", the first home stadium of the club. A fabric sticker of  Heitor, who is the best scorer in the history of the club with 327 goals, is included. As primeiras taças: 16 stickers (4 shining)
This section presents the first great succes of the club, the Campeonato Paulista 1920. A big picture of the trophy is included, composed by four shining stickers. 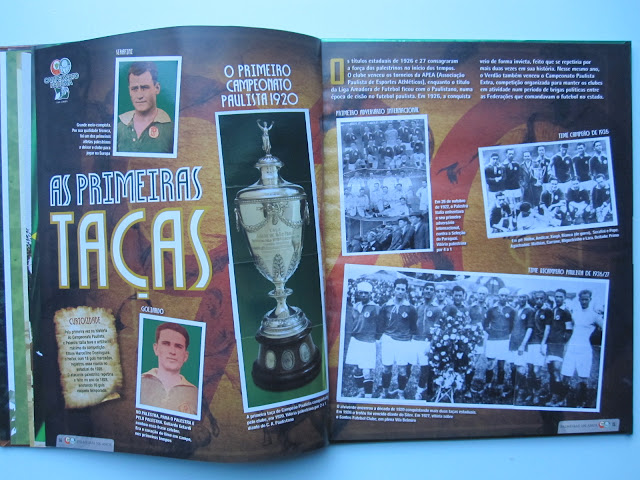 This section is about the successes in the Campeonato Paulista in the 40s.  Two shining stickers compose the photo of the captain Jairo Rosa Pinto. 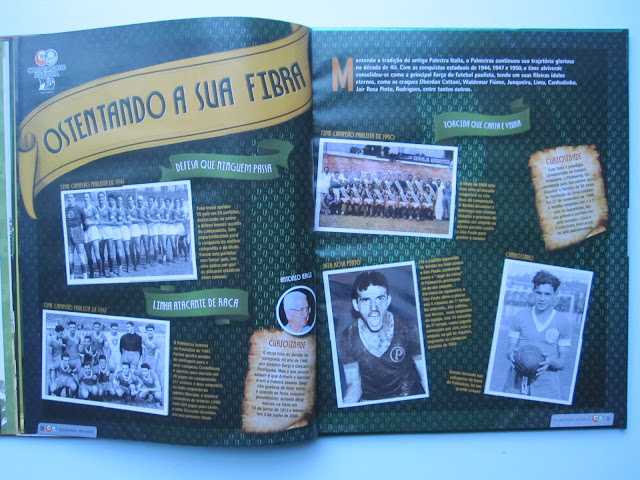 Titulo Historico: 16 sticers (2 shining)
The historic conquest of Paulistao 1993 and 1994, with Edmundo and Roberto Carlos. 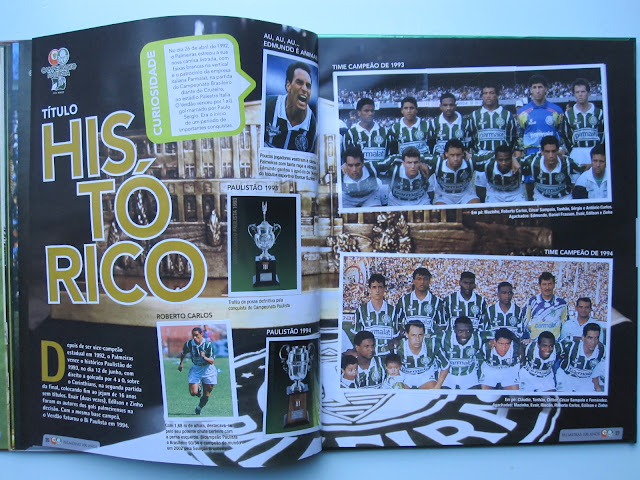 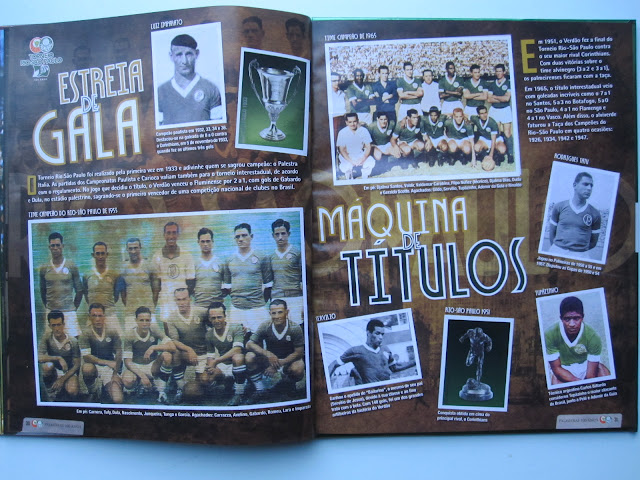 This section is about remarkable friendly tournaments. Also the day in which Palmeiras represented the Brazilian National team is included with a a big shining photo (6 stickers). 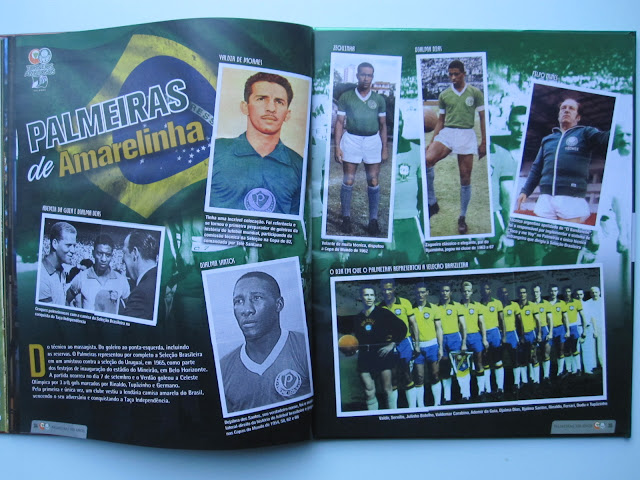 1° Campeao Mundial: 13 stickers (1 shining)
The first international tournament for clubs was the Copa Rio 1951, recognized later by the Fifa as the first World Cup for clubs. Palmeiras won the trophy in a double final against Juventus. 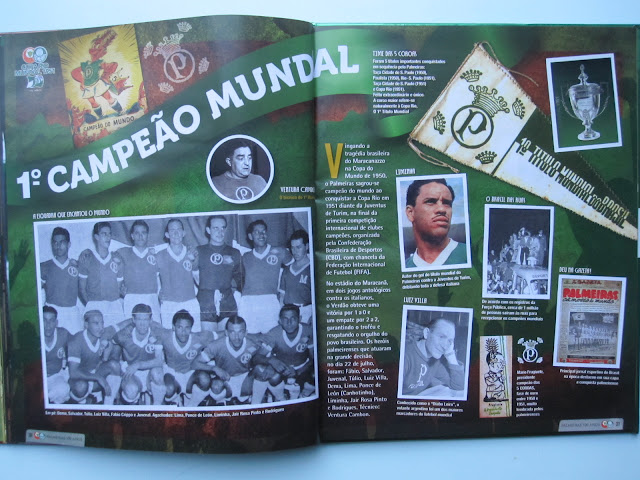 This section is about international tournaments including the final of the World Cup for clubs in 1999 lost against Manchester United. 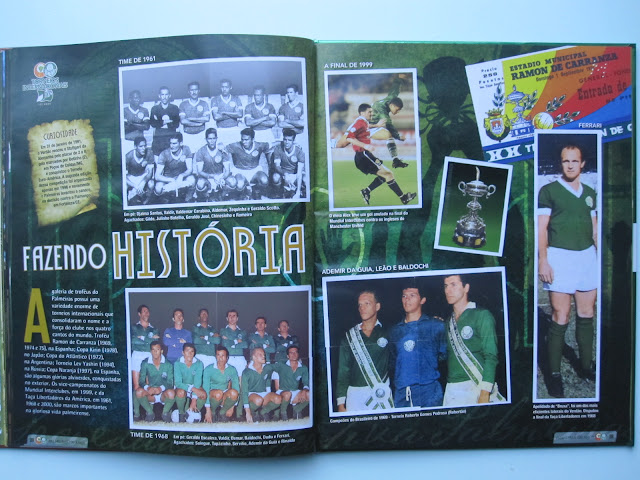 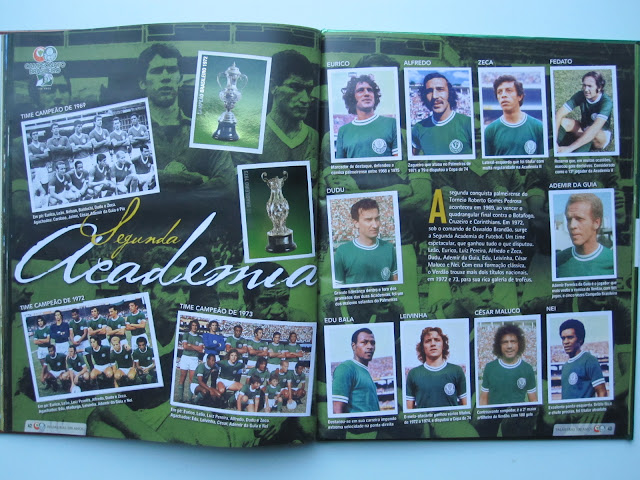 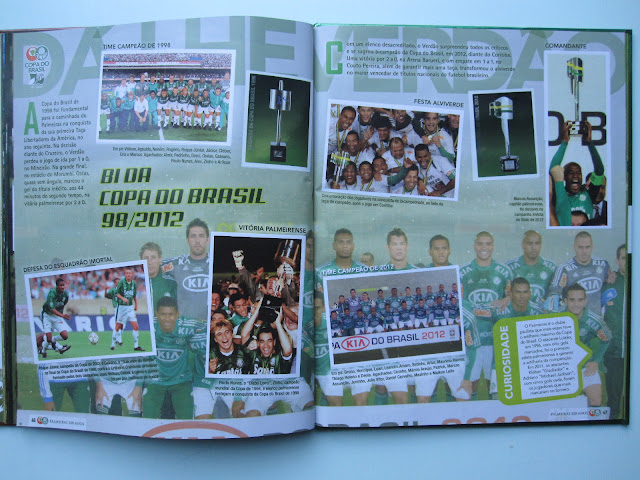 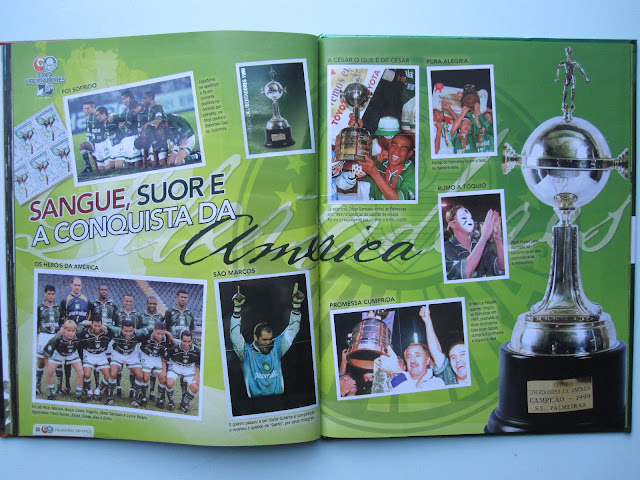 A double page about the new home of Palmeiras, the stadium Allianz Parque. 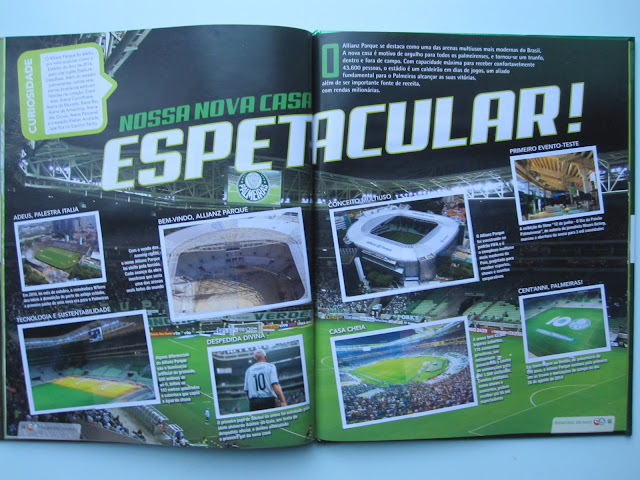 The Parrot, the mascot of the club, is here seen by the eyes of Brazilian artists The results are six fabric stickers with artistic representation of the mascot. 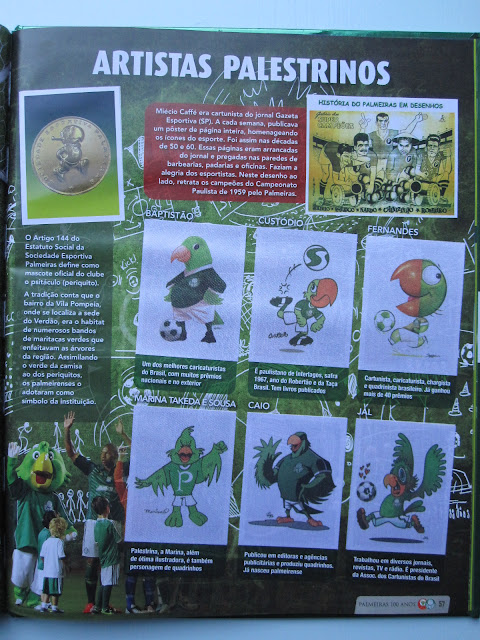 Time do sonhos: 11 stickers (all shining)
Caricatures of the best players in the history of the club: Roberto Carlos, Heitor and Rivaldo (but not Edmundo) are included. 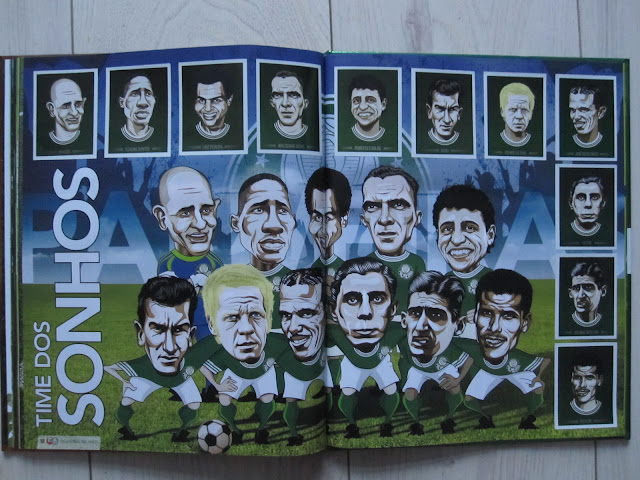 Mantos sagrados: 20 stickers (all fabric)
The evolution of Palmeiras shirt is presented with 20 stickers in special fabric material, from the first shirt in 1915 to the one of the last trophy (Copa do Brasil 2012). 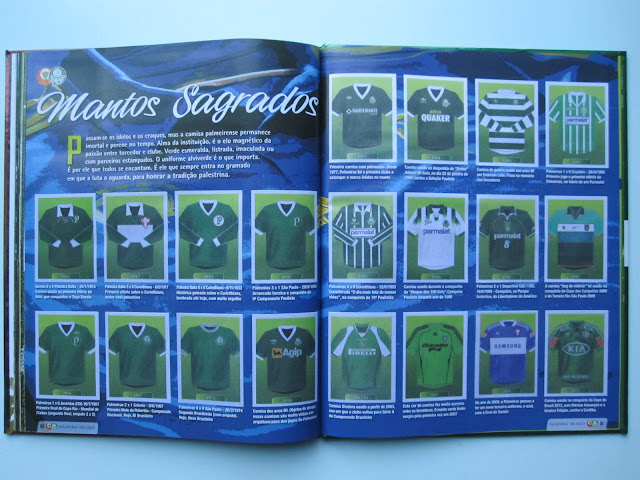